Jason Nichols is a church music 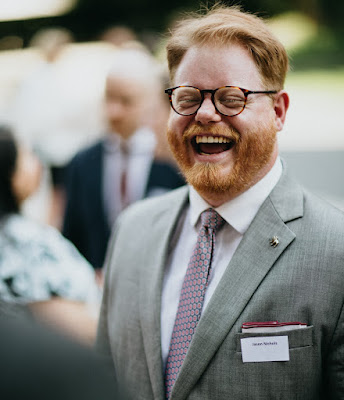 director and voice professor. During the past academic year, Jason spent nine months in the Czech Republic, accompanying his wife Bree on her Fulbright grant, making his official status in the Fulbright program that of a “dependent.” Fulbright Czech Republic has over 2100 alumni on both sides of the Atlantic. Together with grantees, the international stay in the U.S. or in the Czech Republic has transformed the lives of an additional 1000 people, who accompanied the Fulbrighters on their international journey as dependents. These spouses and children left their homes as well and set off for an adventure, but unlike their wives, husbands, or parents, who fulfill their clear-cut grant objectives, the mission of dependents has often been rather blurred and lacked structure. Jason’s wife Bree is a soprano, and she came to the Czech Republic to study Czech art songs in Olomouc and Prague. During their time abroad, Jason continued to work remotely for his U.S. job, but in all other aspects, he was fully dependent on his wife. "I had to learn this, and be reminded of this, that there would always be work, but there wouldn’t always be today. ...It was a wonderful year, a challenge meant only to produce a broader perspective of the world around us," says Jason, confirming that Fulbright stays impact not only grantees but also their families.

I sat there on a cold February morning on a frozen wooden bench in Kralupy nad Vltavou, coffee in hand, watching some birds. They moved up and down the river, sometimes colliding, scolding each other, and allowing the current to move them when they decided to rest. There were times when they would take flight, short bursts of energy that seemed to drop them right back where they started.

I had left my comfort zone back home. As the husband of a Fulbrighter, now working remotely for my U.S. job as we lived in the Czech Republic, I was without my connections or networks. I had emails and tasks to attend to, but I was fully dependent on my wife to understand our cultural milieu, language barriers outside our apartment, even getting around the city. I let this stymie me when I first arrived. In an effort to create routine and agency, I kept myself from experiencing life in the Czech Republic because I felt paralyzed by my lack of understanding, connections, and personal agency. That day though, sitting outside in the cold, knowing no one stateside would be awake for another eight hours, I began to breathe. 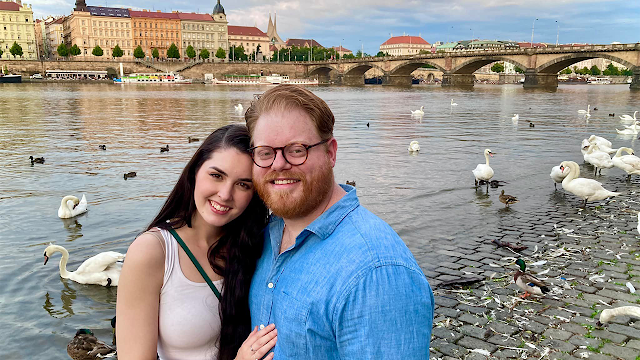 Photo: An afternoon walk across the beach of the Vltava to admire the Swans, May 2022.

I didn’t always watch the birds; sometimes I would meander aimlessly among the streets of Prague, landing where whimsy took me, often bringing Bree back whenever her rehearsals or research were done. I loved taking the 9 tram down to Václavské náměstí and walking to the Národni divadlo, or through the winding side streets to Old Town, just moving with the people. One time, in December, I walked from Žižkov to the top of Václavské náměstí (next to the statue of St. Wenceslas) and sat there for an hour or so, just watching the people and enjoying the holiday air.

This was how I lived, by observing and reveling in the life around me. I had to learn this, and be reminded of this, that there would always be work, but there wouldn’t always be today. I had to create my own agency in a season of life where I didn’t have a lot of structure. I would travel with Bree to her various performances, rehearsals, and conferences, and then I would wander.

In a way, I had to accept that I wasn’t in control and that I was free to enjoy this time, with whatever the day brought. Often this would manifest by taking walks and exploring without reserve. Bree and I would often walk up Vítkov Hill, and then return home once we had enjoyed reveling in the third largest bronze rider statue in the world. One day I went on my own and took a few steps past the statue, and two hours later I returned home excited to show Bree all I had seen. This led us to many long walks, discovering nature trails, and allowing the path to dictate our journey. Once again, Prague revealed itself to us and showed it had a bounty of secrets to be plumbed. 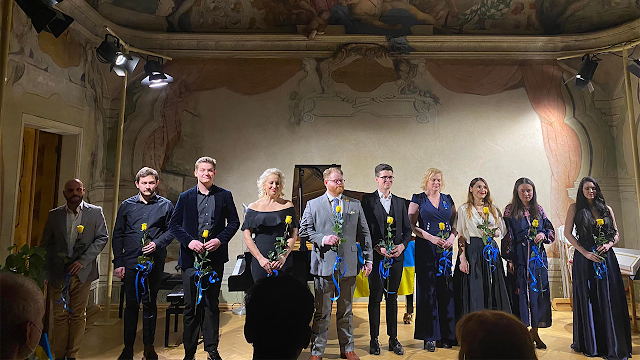 Photo: Company bow in Prague after a benefit concert for Ukraine, March 2022.

In finding my agency, I was able to craft my own experience, even when my schedule was formed around what Bree would be doing that day (often, that involved train rides all across the country for musical performances.) This was an important lesson for me to learn, that the freedom to enjoy this season didn’t have to be at odds with what Bree was doing; that I could make memories wherever I was for the day. It necessarily involved a lot of communication between Bree and I.

When I was sitting on a cold, frozen bench watching the birds, she was getting her hair and makeup done for a photoshoot. I then helped her walk up stairs in her huge gown, navigate tricky corners, and keep her skirt from getting tangled as we traversed across wooded areas so we could capture those picturesque moments. I would often record her performances or take behind the scenes photos, setting up gear in the balcony or front of house; but during rehearsals I would feel free to go enjoy the city, checking out a museum or site I had researched or happened upon. 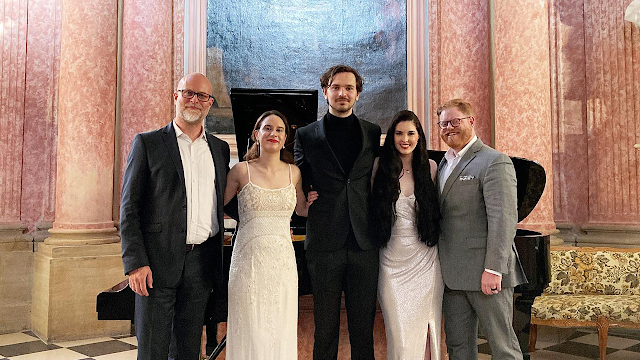 Photo: After a concert in Brno with Martin Vodrážka (baritone), Isabel Kaleti (pianist & fulbrighter), Jan Mára (pianist), Bree Nichols (soprano & Fulbrighter), and Jason Nichols (tenor), January 2022.
It was lonely at times, but it was also revealing. I was allowed the space and time to consider what I valued, what I wanted out of life, and even how to achieve these values and ideals. It took time, but I began to understand that my pace of life did not need to be dictated by a to-do list, but could be enjoyed alongside working hard. Though at the beginning I had felt I was there in the Czech Republic to support Bree, I began to feel I was allowed to enjoy it myself. I’ll never forget walking through the Malá strana after one of Bree’s first concerts, the shadows of the moon gleaming across the gothic architecture.
Nina Tučková, a Czech poet, says this of Prague at night:
Miluji tvoje stříbrné usínání s krajkovím stínů na zdech podél cest, celý tvůj klidný obraz v Boží dlani, ty líbezná, ty která ze všech měst usínáš nejkrásněji.
I love the silver way you fall asleep, with a lace of shadows on the walls along street. The whole of your peaceful image in God’s hand; You lovely one, you, who of all cities fall asleep most beautifully.
My encouragement to any Fulbright dependent would be to embrace the time. Take a guided tour, and have someone help you learn how to navigate the city yourself. I would recommend reaching out to the Fulbright office as a resource to be introduced to spots off the beaten path to get beyond the “tourist” experience. Don’t be afraid to get lost, knowing that virtually every street at the heart of Prague will lead you back to the Staré město or Václavské náměstí. Get used to buying your groceries daily (a novelty for someone who lives in Texas!), and absolutely enjoy the fact that there is a multitude of cafés, delis, and bakeries for a relaxing break to watch the world go by. Learn whatever bits of language you can, use them regularly, and be grateful when others are willing to speak English with you. Maybe you will eventually, like me, begin to feel like the Czech Republic is home.
I was honored to spend this past year in Prague, to enjoy its history, meet its people, and fall in love with one of the most beautiful cities in the world. There are many more stories, experiences, and people that could be mentioned. It was a wonderful year, a challenge meant only to produce a broader perspective of the world around us. The most telling thing to me, though, was when Bree and I visited Paris, even after visiting stunning Versailles, we couldn’t wait to get back home, head down to the Vltava, and watch the birds. 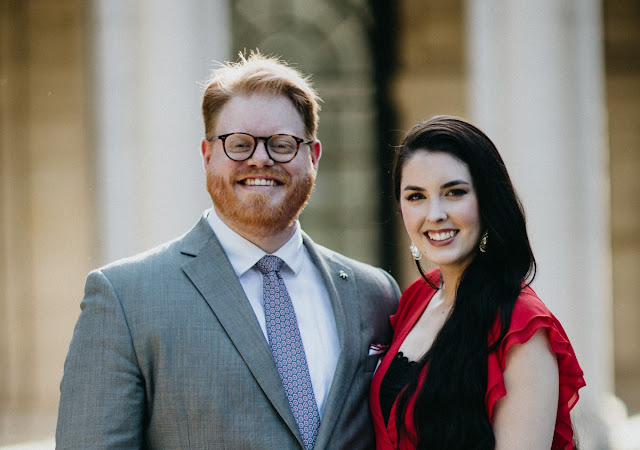 Photo: Jason and Bree at the Farewell event for U.S. grantees in the Czech Republic, May 2022, Residence of the U.S. Ambassador in Prague.

ledna 20, 2022
Anna, Maddie, Saemyi and Madison arrived in the Czech Republic in August 2021 to assist with English language education at Czech high schools in Litomyšl, Kolín, Světlá nad Sázavou and Jaroměř as Fulbright grantees. All of them met for the first time at the in-country training that the Fulbright Commission hosted during the last week of August at Castle Liblice, located about 30 miles North of Prague. The training for the 33 English Teaching Assistants who are currently placed at high schools all over the Czech Republic took five days. For the last two days, Czech high school teachers, who serve as mentors of Fulbright ETAs during their whole 10-month stay joined as well. To encourage communication and cooperation among grantees and teachers placed nearby, all American grantees and their Czech hosts were grouped into so-called “nests.” Some nests are nice and tight, with grantees located within 30 minutes away of each other, while other grantees have to travel a bit more. Looking at th
Další informace

května 13, 2022
Muriel Unseth is an English Teaching Assistant, a literature and poetry enthusiast and a marathon runner. Since September 2021, she has been teaching English at Gymnázium Rožnov pod Radhoštěm, in a town of 16 000, located in the Beskydy Mountains. From the main square in Rožnov, one can take a well-marked 6-mile trail or run to the top of the mountain Radhošť, 1129 meters or 3704 feet above sea level. Even though Muriel was attracted to the Czech Republic mostly because of the country’s excellence in literature and poetry, throughout her grant period, she has discovered another less-known passion shared by many members of her community and that is running, especially trail-running in the countryside. Muriel did not have to wait for this revelation too long, as her mentor Kateřina invited her to see the movie “Zátopek” during Muriel’s first week in the Czech Republic. The story sparked an interest in discovering more about the life and heritage of this exceptional Czechoslovak athlete w
Další informace