Ryan Bahar: An ETA and Aspiring Doctor: Why Not Be Both?

Ryan Bahar was a Fulbright English 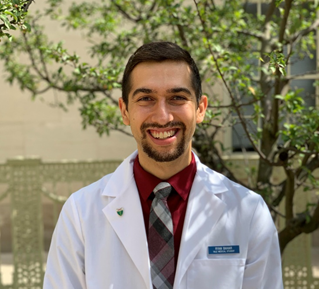 Teaching Assistant (ETA) at Klvaňa Gymnasium and Nursing High School in Kyjov. He spent the 2018/2019 school year developing English and critical thinking skills of hundreds of his students, meeting them in his afternoon "American Club," studying Czech language with a local friend, taking dance lessons with his students, and exploring community and cultural life in South Moravia. The Fulbright ETA Program offers American students, mostly recent graduates, to spend a year in a host country while assisting local teachers with English language education at high schools of all types. The variety of Czech high schools attracts American students with various academic backgrounds, host community engagement plans and future career aspirations. Ryan's motivation for the ETA grant was to: "...grow as a teacher so that I may one day deliver high-quality patient education and train the next generation of medical providers. As an ETA, I could gain cultural awareness and tactfulness to later inform my care for patients marginalized by the U.S. healthcare system..." In this blog post, Ryan shares how an ETA experience can be the right choice for an aspiring medical doctor. Ryan is currently a second-year medical student at Yale School of Medicine.

During my last summer of college, confusion permeated my interactions with family and advisors. “Ryan, I thought you planned to go to medical school. Why do you want to teach English abroad after graduation?”

These two sentences—often spoken with astonishment, or genuine curiosity, or tenderness, or a combination of the three—terrified me as I prepared my application for a Fulbright English Teaching Assistantship (ETA) in the Czech Republic. I could not articulate a well-packaged “why,” yet I felt so strongly that this was the right experience for me to pursue. I desired to teach because I had been immensely fulfilled as an ESL tutor, teaching assistant, and high school STEM program coordinator in college; I was eager to immerse myself in the great unknown of a foreign country I admired from afar, recognizing that my understanding of the world was largely limited by the small town I grew up in and the privileged undergraduate institution I attended; and I thrived most when my life was filled with both independence and community, two themes I encountered consistently when reading about Fulbright experiences in the Czech Republic. As natural of a choice that an ETA was, it was not the “logical” one. If I truly wanted to become a physician, why was I more inclined to teach than do clinical work or research after graduation?

Needing to reconcile my interest in a teaching Fulbright with my medical aspirations proved to be a blessing in disguise. As I thought about how being an ETA in the Czech Republic could inform my future career, I came to terms with my motivations for pursuing medicine. In college, I fell in love with the service defining a physician’s work. As a physician, I would be privileged with entering the lives of patients (and their families, both biological and chosen) when they are most vulnerable. In some cases, I would reduce their affliction, and if not, at least I could hopefully lighten the experience for them. This profoundly important and humbling service was the hat I would be most honored to wear, but becoming a physician brought a whole hat collection: researcher, innovator—and perhaps most meaningful at the time—teacher and culturally competent healer.

That was it: as an ETA, I could grow as a teacher so that I may one day deliver high-quality patient education and train the next generation of medical providers. As an ETA, I could gain cultural awareness and tactfulness to later inform my care for patients marginalized by the U.S. healthcare system, particularly important traits for me to develop as a queer man hoping to dismantle health care barriers faced by LGBTQ+ communities.

My answers to the “why”s of my family and advisors became easier, self-assured and more precise. A Fulbright ETA was not a deviation from my career trajectory, but a springboard: an opportunity to grow personally and professionally into my authentic future-physician self.

And Fulbright was exactly that.

During my year as an ETA, I was beyond fortunate to lead English classes for hundreds of students, give university lectures, and start a school conversation club. I honed teaching strategies that I still use three years later and will continue to use throughout my career. 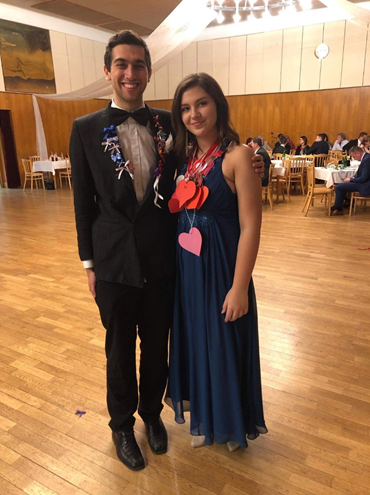 Photo 2: Ryan, left, at a traditional Czech dance lesson with one of his students. (Ryan and a female student, dressed in fancy evening ball attire, pose together for a picture.)

I also became modestly fluent in Czech, took weekly dance classes, and spent countless afternoons in family homes, warmed and humbled by the generosity of those who let me into their lives without expecting much in return. I learned to appreciate the complexities of the people around me, practicing active listening and openness to better understand stories and the people who tell them. After a year of trying (and many times failing) to meet people where they are, often in a place beyond what I could gather from keenly listening, it became clear how much I do not know about the kaleidoscope of human existence. Fulbright showed me that open communication and empathy must be an inextricable part of how I approach my future, both personally and professionally, to cultivate a mutual understanding upon which good things may grow. 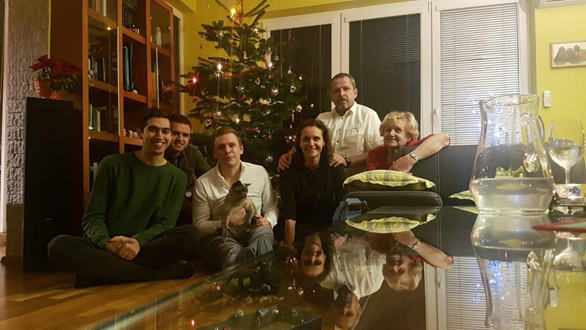 Photo 3: Ryan, left, celebrating Christmas with his Fulbright mentor and her family. (Ryan and five other people pose together for a picture in a Christmas-decorated living room, a traditional Czech Christmas tree in the background.)

Unexpectedly, Fulbright fostered a critical approach to bettering the spaces I inhabit. I became critical through recognizing differences between the Czech Republic & the U.S. and exchanging perspectives of these differences with colleagues, students, and fellow grantees. At the school I taught at, I became critical through identifying needs that I could address through side projects on my grant. In one instance, this meant organizing a joyous “America Day” that brought four other ETAs to teach and play American football at my school. 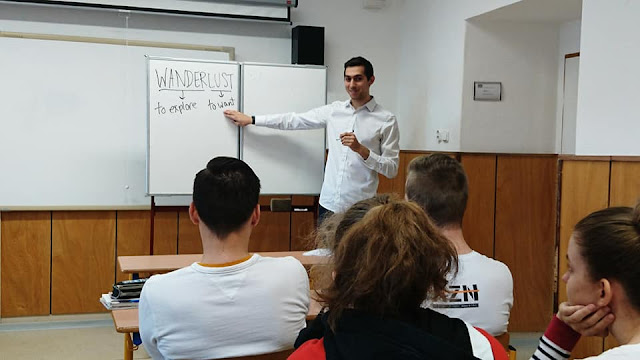 Photo 4: Ryan teaches English at Klvaňa Gymnasium in Kyjov, May 2019. (Ryan points to the word "wanderlust" highlighted on a blackboard in a classroom. Students (in the foreground) watch Ryan during his presentation).
Eventually, I even became critical of my own motivations that got me to the Czech Republic, especially the desire to acquire cultural competence for my future career. Previously, I believed that culture was something one could learn and “know,” not having pondered the threat that this poses to minorities who may be unjustly stereotyped and face alarming disparities as a consequence. Because of my experiences with Fulbright, I am more able to appreciate culture as an entity less precisely definable—and as Carpenter-Song et al. suggests, something to be “ready for” rather than something “to know.” Now, as a medical student, I find this critical approach essential to asking the right questions in order to promote justice for all patients…

…Looking back on the days when I questioned whether I should apply for a Fulbright ETA, I am so glad I followed through with it. Despite Fulbright initially seeming inconsistent with a career path in medicine, it prepared me for my professional and personal life in more ways than I could have imagined. A Fulbright ETA was the right choice for me as an aspiring physician, and it may just be right for you, too.

ledna 20, 2022
Anna, Maddie, Saemyi and Madison arrived in the Czech Republic in August 2021 to assist with English language education at Czech high schools in Litomyšl, Kolín, Světlá nad Sázavou and Jaroměř as Fulbright grantees. All of them met for the first time at the in-country training that the Fulbright Commission hosted during the last week of August at Castle Liblice, located about 30 miles North of Prague. The training for the 33 English Teaching Assistants who are currently placed at high schools all over the Czech Republic took five days. For the last two days, Czech high school teachers, who serve as mentors of Fulbright ETAs during their whole 10-month stay joined as well. To encourage communication and cooperation among grantees and teachers placed nearby, all American grantees and their Czech hosts were grouped into so-called “nests.” Some nests are nice and tight, with grantees located within 30 minutes away of each other, while other grantees have to travel a bit more. Looking at th
Další informace

května 13, 2022
Muriel Unseth is an English Teaching Assistant, a literature and poetry enthusiast and a marathon runner. Since September 2021, she has been teaching English at Gymnázium Rožnov pod Radhoštěm, in a town of 16 000, located in the Beskydy Mountains. From the main square in Rožnov, one can take a well-marked 6-mile trail or run to the top of the mountain Radhošť, 1129 meters or 3704 feet above sea level. Even though Muriel was attracted to the Czech Republic mostly because of the country’s excellence in literature and poetry, throughout her grant period, she has discovered another less-known passion shared by many members of her community and that is running, especially trail-running in the countryside. Muriel did not have to wait for this revelation too long, as her mentor Kateřina invited her to see the movie “Zátopek” during Muriel’s first week in the Czech Republic. The story sparked an interest in discovering more about the life and heritage of this exceptional Czechoslovak athlete w
Další informace

Allison Gish: A Year in the Vineyards

září 29, 2022
Allison Gish was an English Teaching Assistant at  the only wine-making high school in the Czech Republic, located in a South-Moravian town of 3.600 inhabitants. Small in size, but rich in sights and reasons for Czech and international guests to visit: Baroque, Neoclassical and neo-Gothic palaces, Palava Landscape Protected Area, and prime Czech vineyards wherever you look. With a BA in English Literature and a minor in Art, diverse travel experience, a passion for the outdoors, and a personal dream to (one day) become a wine-maker, Allie was placed into a unique school environment, where students sign up for either a wine-making major or for agribusiness, tourism, and hospitality. Over the course of ten months, Allie experienced almost the full wine-cycle, she learned about wine-growing, wine-cultivation and making, and she spent lot of time with her students and fellow grantees in the vineyards (and wine cellars), tending to school vineyards, mouthfeeling wine, and exploring the beau
Další informace