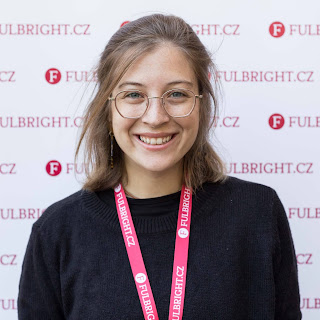 Logan Stallings taught English during the academic year of 2019/2020 at Secondary Art School in Bechyně. In her English lessons, Logan bravely experimented with team teaching along with her mentor Markéta, and she took a weekly ceramics class. Together with other ETAs in the area, who were placed at Business & Services High School in Tábor and at Gymnázium Pelhřimov, Logan helped to initiate cooperation between the three schools. As the real estate market in Bechyně is limited, Logan lived in Bechyně Castle.

It’s hard to believe that a year ago, I was in the Czech Republic. Since the pandemic started, it’s felt like the days were barely creeping by; time seemed to slow down, and 2020 stretched on for an eternity. But somehow, in hindsight, the months have flown by. Time flies when you’re social distancing to the best of your abilities.

I miss the Czech Republic, and I especially miss Czech Christmas. Even though I was an ETA, when it came to Czech cultural traditions, I was always the student. At the art school in Bechyne where I taught, my students reveled in the fact that I knew so little about Christmas in the Czech Republic. I learned a lot from my students. I was so eager to learn all about new cultural traditions; my students could have easily pulled the wool over my eyes. They could have told me Elmo from Sesame Street delivers the presents on Christmas, and I probably would have believed them. However, it’s not in fact Elmo who traditionally leaves presents under the Christmas tree in the Czech Republic, but rather a tiny flying baby Jesus, which I think is just as spectacular. I remember asking if flying baby Jesus struck any of the students as a little strange, and one student replied “you have a big fat man who squeezes down chimneys, how is that any less weird?” Baby Jesus versus Santa sparked some very enthusiastic debates in my classrooms, and I remember our Christmas lessons fondly. I also learned about Krampus and the traditional Krampus parades that frequent the Czech Republic during the holiday season. A good deal more sinister than baby Jesus, Krampus is, as I understand him, essentially evil Santa with at least some physiological goat features and a very frightening whip. He’s said to scoop up bad children and throw them in his sack. 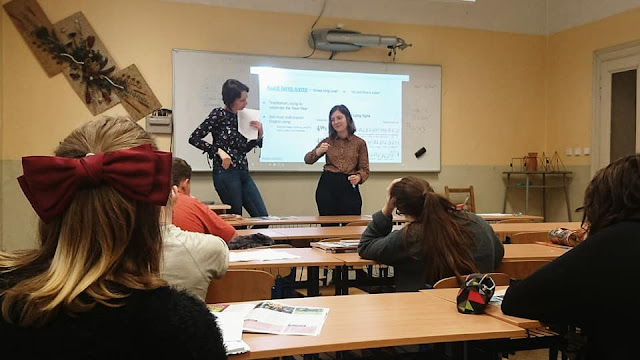 I taught a Christmas-themed vocabulary lesson for one of my younger classes. We talked about American and English Christmas vocab like reindeer, elf, and Santa, then I’d call out the words and the students would draw a picture of each word on a piece of paper. I taught at an art school, so any lesson that incorporated drawing was a huge success. The students would then switch papers with their partners and they’d have to label each of their partner’s drawings with the corresponding English vocabulary word. Funny enough, this was December 2019 at the absolute height of the new Star Wars show, The Mandalorian. This is inconsequential except for the fact that The Mandalorian features nonother than the incomparable Baby Yoda. To my surprise, just about every one of my students in my first-year class drew the “elf” vocab word unmistakably as Baby Yoda in a pointy hat. It was an impressive and hilarious display of my student’s bizarre Star Wars hive-mind.

My host town of Bechyne put up a Christmas tree in the town square, and I actually watched as it was hoisted up by three men and positioned upright. It’s my belief that not really knowing Czech makes the witnessing of any Czech interaction at least 25% funnier than it might otherwise be. For example, I watched three Czech workmen in bright orange vests hoist that Christmas tree up and try to position it in a way where it didn’t noticeably lean one way or the other. Without knowing what they were saying to each other, with the exception of the odd “Dobre” or “Hesky,” their interactions became something of a Carlie Chaplin slapstick routine. One workman was standing a few meters back, with both hands raised and one eye closed, clearly focusing very hard on the straightness of the giant tree while the other two held it in place. It was comical to me because, no matter what they seemed to do, the tree was never really perfectly straight. At the tree lighting ceremony about a week later, the Bechyne tree was endearingly sort of slumped to one side in a heartwarmingly well-intended effort. 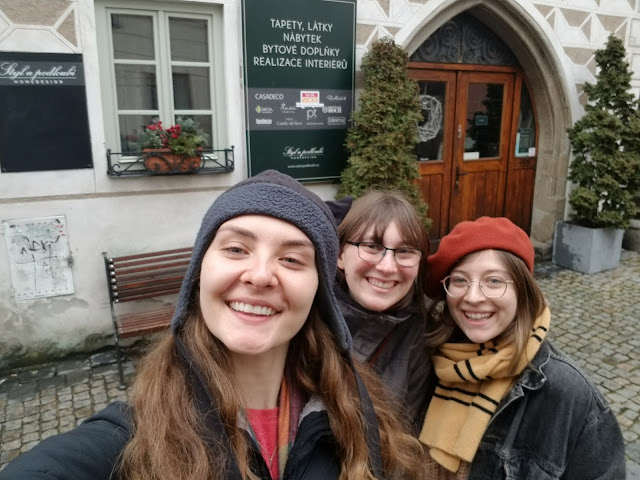 The Bechyne tree lighting ceremony was, like the town’s tree, incredibly earnest and adorable. Little vendors lined the square, and everyone drank spiced hot wine while a neighboring village’s church choir sang a choral rendition of Enya’s “Only Time.” It was, and I mean this with the most heartfelt adoration, a totally different world. Despite the bitter cold and misty weather, everyone came out of their homes in true Whoville fashion to drink hot alcohol, listen to choral Enya, and sing carols the likes of which I had never heard before. I loved my town’s Christmas market and the lighting ceremony of the slightly off-kilter tree, but the events in my town were unsurprisingly dwarfed by the markets and huge celebrations in Prague. Another Czech tradition, though possibly more specific to Bechyne and the neighboring villages, was the exhibit of countless incredibly detailed nativity scenes. I visited two specially curated nativity exhibits within the greater Bechyne area alone. Both of them depicted little wood carved replicas of the town. One even depicted a little wood carved pig slaughter and the Bechyne ceramics shop. There were also countless local donations of little homemade Mary, Joseph, and Jesus set-ups. Among the local contributions, there were some nativity scenes made from painted wood, others from pinecones, one from corn husk dolls, and even one that looked suspiciously a lot like it was made from human hair. It was the most endearing exhibit of heartfelt holiday spirit that I’ve ever seen. The level of craft and care put into all these odd little figures really had me close to tears.

A day after Thanksgiving, some other Fulbrigthers and I headed out to see the freshly opened Christmas markets in Prague. It was an incredibly joyful and crowded scene–unimaginable by today’s standards. Everywhere you looked, there were market stalls, and the delicious smells of food and drink wafted from every direction. There were huge wrought-iron skillets filled with goulash and heated by actual fires below. The scent of invasive Trdelnik with sugar and cinnamon was relentless, and hot honey wine was ladled out of crock-pots into styrofoam cups at every other stall. Handmade goodies like wooden puppets and beeswax candles were everywhere. The Christmas markets were honestly magical. My friends and I missed the first tree lighting in Old Town, but we made it in time for the encore, which was when they turned off all the lights and just turned them back on again to deafening cheers. 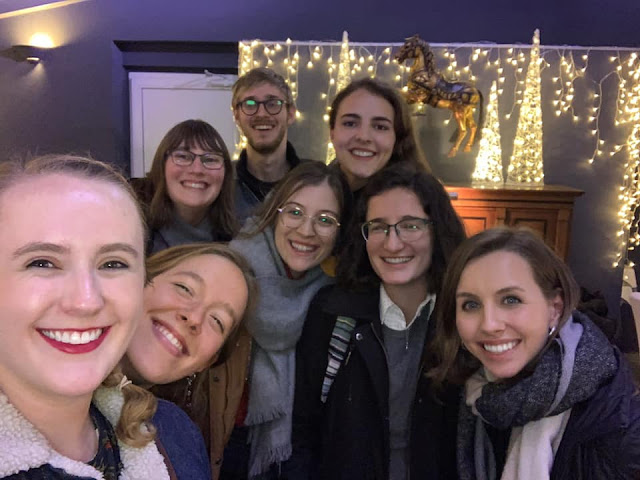 Photo 4: Logan enjoys the company of other grantees during the Fulbright Thansgiving meeting, November 2019.

Baby Jesus, Krampus, and Christmas markets weren’t the only Czech traditions that stuck with me. I was also taken with the artfully made bite-sized Christmas cookies that I received in bulk from just about every Czech student, colleague, and friend I encountered during the entire month of December. The Czechs do not mess around when it comes to Christmas cookies. I ate an exorbitant amount of little jelly-filled stars and beehive-shaped rum-soaked bonbons. It was a miracle that my clothes didn’t burst at the seams, but even if they had, it would have been worth it. One of my Czech friends in town invited me over to bake Vanocka, a traditional Czech Christmas bread. This was way before the bread baking phase of quarantine, so it was really new to me. My friend informed me that Vanocka was traditionally baked on the 23rd of December. It’s made with nuts and pieces of dried fruits kneaded into the dough, the final presentation of which is a golden brown egg-glazed braided loaf. My loaf came out looking better than expected, and I was incredibly proud. This year, I’ll be baking Vanocka for my family and I’m hoping for another glowing success.

This Christmas, along with freshly baked Vanocka, I’ll be sharing with my family the absolute joy of what my students assured me is a traditional Czech Christmas film. I am talking about nonother than the nationally beloved Czech Christmas classic Morózko (1964). The English translation is Father Frost, and I watched the wildly hilarious English dub that exists free on YouTube. This incredible holiday film defies genre and explanation, but I’ll try. It’s a Soviet Christmas romantic comedy that takes place maybe somewhere in rural Finland around Medieval times and is based on an old Eastern European fairy tale. Father Frost akin to Jack Frost akin to Santa saves a young Cinderella-type character from freezing to death in his ice forest. There’s a magic sled, a bear-headed love interest, and a hilarious Baba Yaga among other fine features. I was genuinely enthralled by the film. Having been assigned to watch it by every single one of my classes, I actually received a cheering round of applause when I announced that I had in fact watched the whole film. 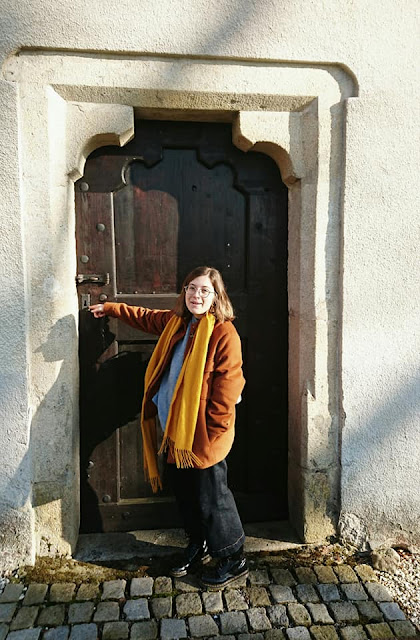 Czech Christmas is a multifaceted gemstone of absolute joy and surprise, and I’m eternally grateful that I got to spend the holiday season 2019 in such a culturally rich place. I cannot wait to return and visit the Christmas markets and my little town of Bechyne again, but while I’m social distancing and limiting my public exposure, I’ll be here in my home of Lucas, Texas drinking hot svařák and medovina while I watch Morózko and bake my Vanocka.