Kevin Curran: The Election ‘Gameshow’ and an Astute Audience Abroad 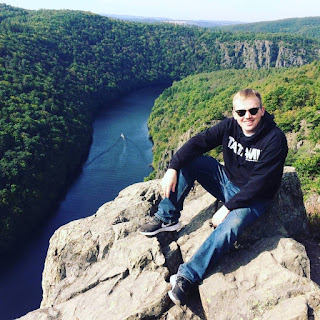 Czech Republic in September 2019 to complete a master's degree in International Economics and Politics at Charles University as a Fulbright student. After finishing his research project "Free Press: A Study of Media Ownership and Youth Perspective" and his Fulbright grant, Kevin decided to stay. Currently, Kevin works at the Association for International Affairs (AMO) as a PR and Project Assistant focusing on China and Russia as well as a Visiting Fellow at the International Sustainable Finance Centre as he continues to work on his master's degree. In this article, Kevin, who previously worked as a journalist for The Financial Times, shares his experience following the U.S. presidential election in a foreign country.

Photo 1: Kevin hikes to Maj lookout, Central Bohemia, July 2020.
As late night television shows are often eager to display with impromptu street interviews, Americans often know little about their own civic processes. The concept of federalism, the electoral college, and other foundational institutions of American governance can simply seem opaque or uninteresting to much of the American public.

However, this disinterest does not appear to extend overseas, as the Czech Republic has been one of heated debate and interested conversation about the election, with nary a question imbuing the silliness and ignorance of the peculiar American process in my experience thus far. Indeed, many began to make a game of it in the early going, betting beers against colleagues as to who would take a state like Pennsylvania or Nevada, seeming to enjoy the race to 270 electoral votes with at least basic understanding of the function. Of course, the American election holds a great deal of significance for nearly every nation in the world, but the closeness with which many Czechs and other European individuals seemed to be following the leadup to the election was quite startling. The election, bolstered by the boisterous demeanor of the incumbent no doubt played a role, but the palpable anticipation for a nation not their own was quite interesting. 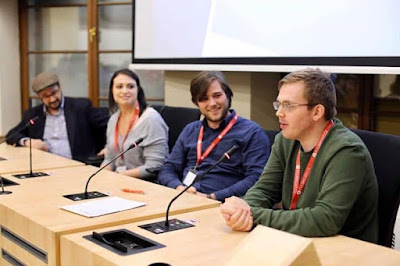 I had received numerous questions and invitations for chats from colleagues of mine at my place of work at a Prague-based international affairs think tank and in editorial groups with news-focused researchers at university in Brno, all of whom might otherwise be expected to follow these developments. An international affairs analyst without a keen eye on the oval office is a rare find indeed. Much to the same end, a media analyst that doesn’t take at least a guilty pleasure in the media circus that surrounds the US election surely does not exist.

Photo 2: Kevin participates in a panel on U.S. higher education at Fulbright mid-year coneference in Liblice, February 2020.
It must be admitted that the repetitive nature of some discussions and the consistent comparison of the election to a game or sort of sweepstakes rather than a crucial political process grew tiresome. Amplified perhaps by the Trump presidency, many of my otherwise academic colleagues began to approach the picking of a new president like a soccer match, with the electee proposed to either play against or alongside Europe. As an American, the lack of reverence for such a storied democratic process was a bit disappointing, stinging one’s patriotic pride ever so slightly.

Yet, it wasn’t just these subject matter experts and analysts that were bandying about some of the more astute observations and questions before, during, and after election day. In fact, a student of the Institute of Economic Studies at Charles University responded to my (apparently wrong) assertion that Georgia was likely to go for Trump on election night with what I regard as the comment of the evening.

“Isn’t it hard to say?,” he asked. “There are still results coming in from Macon County I think. If Biden wins that he might not even need Pennsylvania.”

I must say I was floored simply by reading the letters flash across the chat box. Not simply because it was an astute question and follow up, indicative of an understanding of the electoral college, but because of the level of detail even non-Americans are observing. One has to wonder, is it even possible to imagine such a granular question from an American about Czech elections? I had to wonder what that would even sound like, especially given the still-young democratic presidential election system in Czechia.

“Perhaps the vote could change, there are still votes from Frýdek-Místek District!”

The sentence strains one’s imagination to say the least.

Yet, perhaps that is something that both 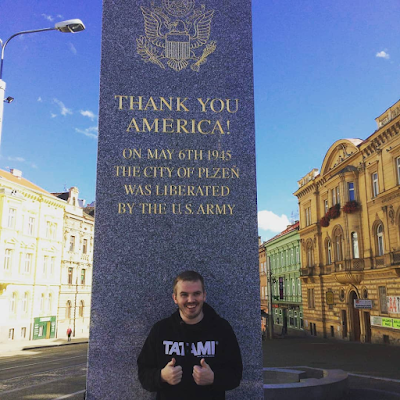 Czechs and Americans can take pride in. While the rationale for watching the election abroad might be merely for the sport, gambling, or other less noble reasons, the viewership is most certainly there, as is the understanding of the process. It should be a sense of pride for many Czechs that their understanding of even foreign politics and peculiar electoral systems is so astute (certainly more so than American common knowledge of foreign elections).

února 18, 2021
Mariel Tavakoli is the current EducationUSA Student Adviser at the Fulbright Commission and was a former English teaching assistant (ETA) in Znojmo (2013/2014).  Read on to learn how Mariel’s Fulbright experience changed her life and continues to inspire her work in writing education and supporting Czech students as they apply for studies in the USA. Next month, Mariel will begin an Essay Workshop with English language teachers and previous ETA mentors representing Czech secondary schools around the country. In Summer 2012 I had just returned from my above-and-beyond amazing semester abroad in Prague, which was the first time I had ever visited, let alone lived in the Czech Republic. It had been on a program weekend visit to Český Krumlov that I first imagined myself as a Fulbright English Teaching Assistant (ETA), living in a smaller Czech town outside of Prague. Everyday of that summer after, I would come home from my summer internship to sit with my computer, working on draft after
Další informace