Don’t Listen to What They Say, Go See 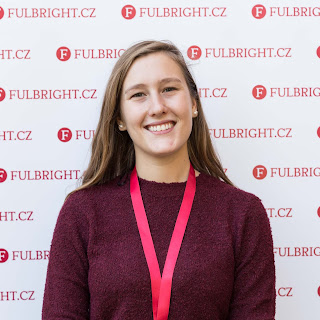 Maryellen Stohlman Vanderveen was one of our 31 English Teaching Assistants during the past school year. After seven months of teaching at Gymnazium Moravsky Krumlov, located in the middle of South Moravian vineyards, the alumna of Smith College with a double major in Philosophy and Psychology, decided to keep teaching, but this time on a different continent. Read about Maryellen's reflections on moving across the world amid COVID-19.

If you asked me what I would be doing this time last year, I definitely would not have answered that I would be writing a blog post from quarantine in Hong Kong. However, I do not think anyone really anticipated what the year 2020 would bring. One year ago, I had just arrived in the Czech Republic. I was attending Masaryk University’s Summer School of Slavonic Studies, trying to learn as much Czech as possible before beginning my Fulbright English Teaching Assistantship in a small Czech town. (Okay, so maybe there was a little partying happening too that summer.)

I didn’t have much of a plan for what would come after my year in Moravský Krumlov, all I knew is that I wanted to stay abroad if at all possible. I had applied to over twenty-five jobs in the Czech Republic and had finally accepted an offer to teach preschool at an English language kindergarten in Prague. When Covid-19 finally hit Europe and the U.S State Department made the decision to end all grants, I knew I had to return home. Schools had already been closed in the Czech Republic for about a week, so it was with a very heavy heart that I said goodbye to the few colleagues and students who were able to come and see me off.

As the situation worsened in the United States and more and more countries began to close their borders to Americans and pause the processing of new visa applications, I tried to figure out what would come next. While scrolling through a college networking group, a job posting which encouraged philosophy majors to apply caught my eye. (You definitely don’t see that every day). It was for a Junior Fellow position at the Chinese University of Hong Kong (CUHK). I saved the post and ended up contacting the poster the next day. Two months later, I was sending off an application for a professional visa and booking plane tickets for what was going to become my next adventure.

I knew that moving all the way across the world during a pandemic was going to come with its challenges, but I felt prepared to handle them since I had the experience of having already moved abroad once. There were some things which I was prepared for, but many others that I definitely was not. A lot had changed since I evacuated the Czech in March (ironically to return to a country where I had a much higher risk of being exposed to Covid-19). I was not prepared for the emptiness of the JFK airport which had just nine departures scheduled for that morning, nor that every restaurant and store in the terminal would be closing at 10:30 p.m. I also did not anticipate the nausea that would result from wearing a mask and breathing in plane air for seventeen hours. I forewent the eggs, bacon, and hash browns that came with the in-flight service breakfast since my stomach was unable to keep anything down the last few hours of the trip.


This was a decision I would come to regret during my ten-hour wait to receive the results of my virus testing. The Hong Kong government currently has a policy of testing all incoming travelers for coronavirus before they are allowed to leave the airport. The AsiaWorld-Expo center has been converted into a testing and holding center where travelers who test negative wait to be sent to either a home or government quarantine center. Those who test positive are sent for isolation and treatment at one of the public hospitals. Overall, I was incredibly impressed with the organization and efficiency with which the airport personnel moved everyone through the process. The Cathay Airlines ticketing counter in JFK had signs displaying a QR code for a Health Declaration form which all travelers had to complete before they would be allowed to move through customs. Filling out this form generated your own personal QR code and there were several checkpoints after you departed the plane where airport staff would ensure you had this available.


At the first of these checkpoints, all travelers were also required to download a StayHomeSafe app which would allow the Hong Kong government to monitor your quarantine. This app would later be connected to a Bluetooth monitoring bracelet that one of the airport’s staff would put on for you. It was important that you did not accidentally activate the app after it was synced to your bracelet because this had to be done only after you arrived at your quarantine address, as it would send a signal of your location. Once your bracelet was activated, you moved on to the final checkpoint where a staff member called your cellphone to ensure the cellular plan was active (you are expected to answer all calls from the government to ensure that you are still at your quarantine address). It took a nerve-wracking three tries before the call would go through to my phone and I was relieved when it finally connected. You then received information about quarantine procedures and a bright orange lanyard so you could be easily recognized by airport staff.

Following customs, everyone was loaded onto a Greyhound-style bus which drove us the five-minutes to the expo center. We entered a large hall containing rows and rows of empty desks where we received an identifying number to clip onto our lanyards and were directed to leave all our large luggage in a corner. We each received a numbered ticket that coordinated to a tag placed on our luggage cart and were quickly returned back to the bus.

At this point, I was a little hesitant to just leave my bags in a near-empty exhibition hall, but I did not think I was really in a position to question or object to their process. The bus then drove us around to the opposite side of the expo center. In a nearly identical hall, we received our testing kits and watched an instructional video on how to self-administer a saliva test. Private booths were set up so that you did not have to hock a loogie with dozens of people watching, but I cannot say that they offered any privacy from the sound. The sanitation protocols seemed excellent and there were several workers deeply sanitizing the booths between every person. There was even a designated bathroom where everyone was required to wash their hands before proceeding on.

I then followed signs through the expo center (once again having my health declaration and quarantine address checked) until I was led back to the first hall where I had left my luggage. I was assigned a desk and told that I would be waiting here until my results came back. While I had taken a test and received a negative result less than a week before flying out from the U.S., I was still apprehensive that my test would come back positive and I would be unable to quarantine on the university campus as planned. Luckily, that was not the case and at around 5 p.m. that evening, I was climbing into a taxi for my first tour of Hong Kong.

As we made our way to the Sha Tin district where the CUHK is located, I was so struck by the beauty of Hong Kong that I quickly forgot to take pictures. We drove across two bridges and through two tunnels while my taxi driver pointed out different landmarks and the city unfurled before me. From steep hillsides, tall buildings rose up along shores of sparkling water, and in the distance, I could see temples resting on top of mountain peaks.

It was about a thirty-five minute drive to the campus. I thanked my taxi driver, took my last breath of outside air, and contacted the dorm caretaker to be let into the building. The woman was very kind and showed me how my key card would grant me access to the private hallway where the staff accommodations are located. As I thanked her and said goodbye, I briefly thought about how this would be my last real contact with another human for fourteen days before I excitedly started checking out the quarantine supplies that the college had left me.

I made a lame attempt at organizing my luggage and settling into the apartment before I hopped into the shower. It was Wednesday night now in Hong Kong and having been traveling since 4 p.m. Monday afternoon, I was thoroughly exhausted but also deeply grateful for having had the chance to even make such a journey given the current circumstances. With global travel all but ceased, it is an incredible privilege to be able to travel at this time. I am thankful to all the family, friends, and colleagues who aided and supported me in this endeavor (even if you thought I was crazy at the time for trying it).

You can read more about Maryellen’s adventure on her personal blog The Sparknote Philosopher.