Virtual Presence in the Classroom by Jubilee Marshall 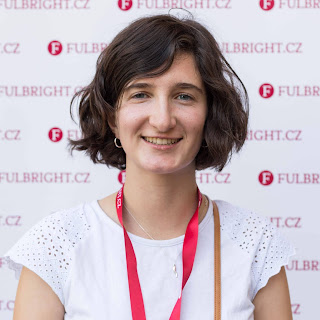 Jubilee Marshall, Fulbright English Teaching Assistant 2019/2020 at Gymnazium Polička, shares her way of maintaining her presence in the classroom and keeping her afternoon conversation club, even though she had to physically leave the CR four months earlier than planned.

I sit attentively at my computer, listening as Tomáš, an eighteen-year-old boy over four thousand miles away, teaches me about investing.

“You only have to invest $20,000 to get monthly dividends,” he explains wisely, in an attempt to get me on board with the concept. Tomáš started investing two weeks ago, as a way to fill his time during quarantine. So far, he has lost $4.00.

He tells me all this during our conversation club, a weekly meeting that began when I was teaching at our school in the Czech Republic and continues in spite of the coronavirus pandemic that sent me scrambling to fly home to Washington, DC. Although I primarily teach the four oldest grades at Gymnázium Polička, the club is open to everyone, and gets its share of visitors from terzie (students around age twelve) to septima (students age eighteen) alike. We even have the occasional visit from Giorgio, an Italian exchange student who arrived in Polička when I did and spent many passionate afternoons arguing about movies (in English!) with his friends. 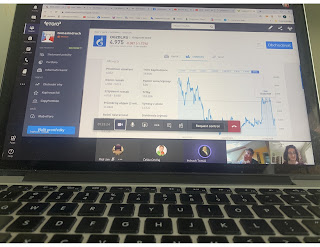 Conversation club was one of the highlights of my time in the Czech Republic; when I was forced to return home in mid-March, I had a lot of sadness about leaving it – and Gymnázium Polička in general – behind. I should have had four more months of teaching, but instead I was flying home suddenly, without so much as a goodbye to most of my students.

Luckily, thanks to the marvels of modern technology and the willingness of my colleagues to adapt to our changing circumstances, I am happy to say that the sudden and total departure I envisioned has not come to pass. Instead, my colleagues and I have done our best to ensure that my departure was not the end of my presence in the classroom and community. In fact, conversation club is just one of the ways that my school and I have continued our partnership during the past few chaotic months.

Each week, I send my students a video update. This usually consists of a simple a five-minute snapshot, a glimpse into what I’ve been doing and how the coronavirus situation in the United States is evolving. Sometimes I monologue to my camera in my childhood bedroom; other times I send a time-lapse of my mother and I making homemade pasta, or a series of clips of DC’s historic monuments filmed through my car’s front windshield.


These videos are available for any of the students to watch, and my colleagues supplement them with listening comprehension questions or other related activities. One week, I received a list of follow-up questions from the students in sexta; you could tell who had used Google translate. Last week, after my family’s refrigerator broke down, I received a list of synonyms the terzie students came up with — they described me by turns as annoyed, riled up, irked, and livid over its untimely demise.


In addition to these real-time(ish) updates, I’ve also contributed some resources that can be used in lessons now or in the future. These presentations include static PowerPoints about a range of maturita topics and video lessons whose subjects range from mapping the plot of Shakespeare plays, to fake news and Coronavirus, to how native speakers tend to describe personality traits.

It’s also been nice to join a few class’s video calls in person. I haven’t managed to attend the earliest ones, which start around two o’clock in the morning Eastern Standard Time, but an afternoon lesson in the Czech Republic is a doable morning meeting over Microsoft Teams for me at home. My students tend to tune in with their cameras off, begrudgingly starting their videos only when I ask — I miss seeing their faces, even if their profile pictures (baby photos, memes, and pictures of cute animals) are plenty amusing.


These calls have been particularly effective in bridging the divide between DC and Polička, making me feel that I am still a part of the community of Gymnázium Polička and communicating to my students that I’m still a resource for them to turn to any time. Sometimes they reach out of their own volition, sending me direct messages with personal updates or grammar questions; other times, my colleagues assign them a conversation with me as homework, and I wake up to forty messages in my inbox. Either way, it’s nice to stay in contact.

And of course, there’s the conversation club. Attendance varies week by week, just as it did in person, but I can usually count on a few students joining. We turn on our videos, say hello, and then they spend an hour or two playing Pictionary, talking about their quarantine activities, or (of course) teaching me about investing.