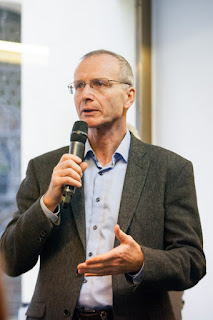 This week we share the achievements of one of our alumni, Prof. David Lukáš, who has become dedicated to applying his expertise in nanotextiles to the COVID-19 crisis. Read on to learn more about how Prof. Lukáš’s Fulbright experience at Clemson University led him to create a team of PhD students at his home institution, the Technical University of Liberec, who are now on the frontlines of mass-engineering a new textile to protect us against the virus.

Professor David Lukáš, Professor and Rector Emeritus at the Technical University of Liberec (TUL), for years the Head of the Department of Non-woven Textiles within the Faculty of Textile Engineering. He serves as an Honorary Ambassador of the Fulbright Program at TUL.

David Lukáš was a Fulbright Scholar in 2009/2010, visiting the Clemson University School of Materials Science and Engineering, Lab of Nanofluidics. Already when applying for the Fulbright scholarship, Professor Lukáš was a widely-recognized scholar with remarkable achievements in nano textile research. However, he certainly does not belong to the group of scientists in ivory towers. For many years he was involved in work for the Vize 97 Foundation of Vaclav Havel and Dagmar Havlova and was a Board for Education member. At Clemson University, the main contribution of his Fulbright experience and cooperation, other than scientific papers and articles in peer reviewed journals, was a change in his approach to his students. In his final report 10 years ago, David wrote, “I will change nearly completely my approach to PhD study leadership according to the US style,” and, “I will return back to my professor position at our Faculty of Textile Engineering. I do not aspire to move to a new position since I have recognized during my visit to Clemson that the most important university work is the professor post and his/her influence on students.“ Now today, David has succeeded in building a world-class lab with many of his PhD students becoming his colleagues.

At the onset of the coronavirus crisis in the Czech Republic, the Technical University of Liberec was not involved in the control or fight against the virus, like other universities. Nevertheless, already a week after the first cases appeared, Professor David Lukáš’s team reacted to a call from the regional government for help and support of health workers and doctors in the region who were facing shortages of protective tools and gear. Within a week, they began to test a new textile, which was almost doubly successful in protecting against viruses compared to the material they had developed earlier. The team, including all researchers and students, started sawing face masks from this nanotextile, which by Czech Academy of Sciences standards is equivalent to respirators of the FF2 or even FF3 classification (more than 90% antivirus protection). The Rector’s Meeting Hall was converted into a factory and production grew up to 2,000 masks per day, only a couple of days after introducing this new material and new machine, which was able to treat the new material in such a way that its protective characteristics did not decrease. Now, TUL is searching for industry producers, which would be able to make much bigger numbers of these disposable masks. The government is interested in production and distribution, as well.

This is not the only result of the immediate reaction of Professor Lukáš and his team to the coronavirus situation in the Czech Republic. TUL is also producing filters for cloth masks, are 70-90% efficient for protection. A couple of weeks ago, they were able to produce 3,000 filters per day and now, the production is about 20,000 per day. Together with the students from TUL, Professor Lukáš joined the public appeal and initiative, “Rousky s TULkou,” in which they built upon the broad, popular reaction of civil society to make cloth face masks out of home materials for necessary workers and resulting social media campaigns to ask people to make a particular type of the mask, which is suitable for using the filter produced by TUL. Now, this filter is available to purchase on https://www.rouskylidem.cz/, making the textile accessible to all within one month.

Professor Lukáš is an example of a Fulbright alumnus who is active in outreach beyond traditional research to spread the results of long term academic work to the broadest public, flexible in adapting to new conditions and societal needs, connected to grassroots civic initiatives, and committed to help practically and immediately as much as possible at both the regional and national levels. That is what we praise in our grantees and alumni, not only academic excellence but also humanity, solidarity, and a sense of social responsibility.

Hear more about the work of Prof. Lukáš and his team at TUL in his recent interview on DVTV.