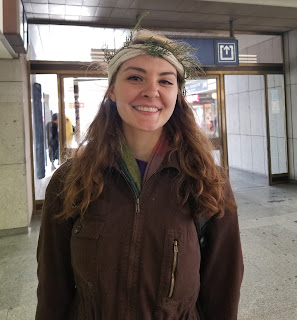 I had the privilege of attending one of the strangest culture-bomb events I have ever seen in my life.

What is Masopust? The way my Czech friend-of-a-friend explained it to me was this: it’s a three-in-one festival in early spring. It’s a combination of Czech Mardi Gras, a welcoming of the spring season, and the beginning of a “fertility” period.

I hadn’t planned to attend, but I found myself in Prague with an invite and nothing else planned for that day. I arrived at the festival with a few other Fulbrighters; three scholars and myself as an English Teaching Assistant. Also joining us was a group of NYU students and their Czech professor, Matej, for the festival.


What first got me curious was the amount of people on the train to the festival. We were only travelling three stops from a smaller Prague station, but the train was
p a c k e d with people. Almost everyone was wearing a costume. There wasn’t a central theme; whatever you could find or make would fit. Not wanting to be left out, I took my headband from my pocket, plucked a few leaves off of a bush, and stuck them in to be a forest fairy. Among the costumes, we saw multiple elves, cats, musicians, angels, devils, and chickens.

So. Many. Chickens. (More on that soon). 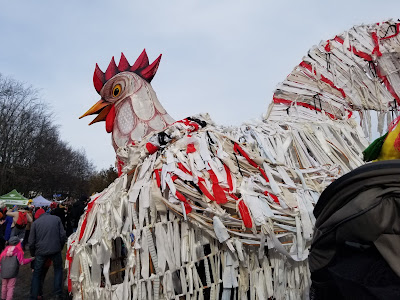 Upon arriving at the fairgrounds, we surveyed the surroundings. There were several small children pulling wagons behind them selling kolaches (small pastries and cakes) for 10-50 Czech crowns (about $0.50-$2.00). What also shocked me were the giant costumes people had. We saw a chicken, moth, and a polar bear. I assumed people had made these just for the festival, but apparently you could go into a building nearby and rent one for free for the day. A few of our NYU friends got some giant chicken heads made of papier-mâché and joined in the fun. These giant chicken heads became our beacon in the crowd to find our way to each other if we got separated. 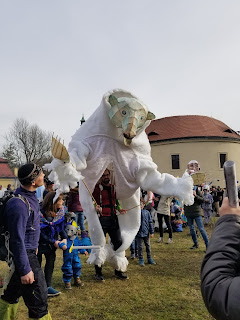 One detail I want to note was the polar bear costume. It was huge, maybe twelve feet tall, and many women were walking up to it. I went to join in, but Matej stopped me.

“Madison, they say if you dance with the bear, you will be pregnant within the next year.”

I paused. I quickly decided that staying put and sipping my drink would be a better idea than embracing the bear.

After walking and talking for a bit, the crowd started to shift. We began walking up a spiraling path to the other end of the small town. We were going to meet two other villages who were participating in the same Masopust for a final gathering at sunset. Once again, this was one of the most unusual events I have ever attended. Hundreds of singing people, dressed in any costume imaginable, meandering their way through this town in a parade.

We made our way to a giant field, where we stopped at snack stalls for frgál (cheese and poppyseed cake). Then, we continued walking to another field, where we finally met up with the other two villages.

So there I am, standing in the middle of a muddy field with multiple chicken heads surrounding me as bush branches scratch my face, watching the sun lower in a fiery sunset. I’m surrounded by at least a thousand other people, when we start to grab hands with one another and slowly back up to make a circle. 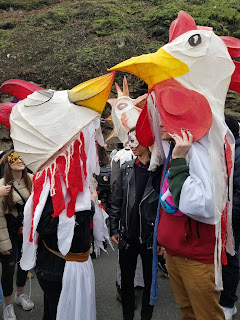 We continue moving backwards. The circle is growing larger and wider and farther, until my arms are stretched tight and everyone is half screaming, half laughing. Then, we run.

Everyone sprints to the middle of the giant circle we made and starts jumping, yelling, laughing, and dancing. All people young and old are joining the fun. I have no idea what’s happening or what the announcer is screaming into her megaphone. But I love it.

We start to form another circle where we are each given a paper bag to inflate. I inflate my bag and stand at the ready. We watch several parties come into the center, including a man in a horse costume, multiple girls in traditional folk dresses with brooms, a couple on stilts, and the announcer.

At this point, the sun has set and it’s dark. The circle is lit by flashlights and string lights within the giant costumes. The announcer starts spouting a tale in Czech to everyone, one of which I imagine tells about the welcoming of spring. She’s talking to the horse. The girls are dancing. The couple on stilts are prancing around. The announcer continues announcing. Then, she looks at the crowd, everyone gets their paper bags ready, and at her command, we pop them simultaneously.

Tragically, the horse falls to the ground as we have “killed” him. The girls start dancing their way out of the crowd. The couple on stilts leaves. Then, magically, our announcer coos at the horse and he arises from the dead. Everyone shouts for joy, and the dancing begins again. 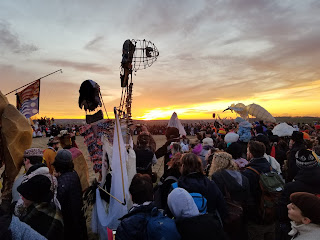 I frolic around the field with mud in my shoes and giant chicken beaks to my left and right. It was certainly not how I had planned the day to go, but I was very glad it did.

The festival ended shortly after. We walked back to the bus station and returned the costumes. I then woefully removed my branches, and spoke with the scholars and NY students. 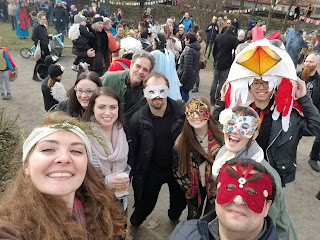 “This was one of the craziest and coolest fever-dream things I’ve ever been to. I’m going to remember it for the rest of my life,” remarked one of the students.